THIS MONTH IN HISTORY AND SONG

A month-to-month, more gradual approach at learning a bit more about the world around us and some of the notable events that took place on it over the past couple hundred years.  Each of the twelve sections contain songs and descriptions of events that took place sometime during that particular month.  I find this method of sharing the history and the songs especially lends itself to seeing some of the patterns that start to form when you look at the broad strokes of history without dwelling as long on one particular period.

The Musical History Project is co-sponsored by the Zinn Education Project and the Peace and Justice Studies Association — not financially, however.  The resource is free for anyone to use, but if you’re able to support my work by joining my CSA this will make it possible for me to do lots more. 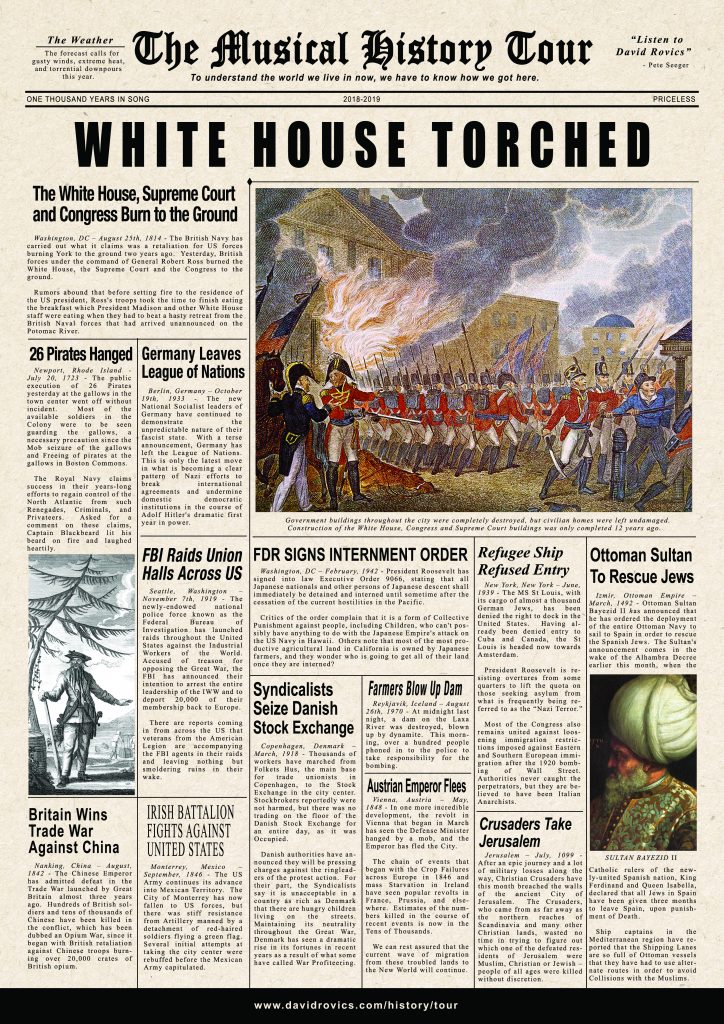 For those who want to start at the beginning and work their way forward chronologically, this is for you.

At the end of each module there are thoughts and questions that might be asked about each section to further explore the subject at hand.

SECTION A: US AND WORLD HISTORY

SECTION B: US AND GLOBAL CURRENT EVENTS

“David Rovics sings people’s history to life. His songs can be funny, poignant, or outrageous; but they never fail to inform and inspire. These provide a brilliant soundtrack for educators who seek to nurture students’ empathy — to bring them closer to the people whose lives we seek to illuminate in our classes. Now, Rovics has organized many of his songs into themed teaching modules, adding commentary and context. What a gift to educators everywhere.”

“I have always felt that David Rovics is a true heir to Woody Guthrie.  Like Woody, he has always been passionately committed to telling the buried histories of people’s struggles.  With this new resource, students of both American and global history — as well as current events — will gain a fresh and electrifying insight into the ongoing struggles for people’s justice.  David’s songs belong in the same restorative curricula as Howard Zinn’s histories — they walk hand in hand.  It is tempting to say that they are needed now more than ever; but in fact, they have always been needed.”

“Musicians have long played important roles in documenting and transmitting stories of resistance and keeping hope alive. Now, David Rovics has created a great resource for educators through which to engage the power and visions of hidden histories and geographies of people’s struggles against injustice.  With songs that concern inconvenient truths about the state of the world, including the power of collective organizing by ordinary people and inspiring stories of solidarity, resistance and victories against oppression and exploitation, Rovics takes us down rich avenues of possibilities for critical inquiry, learning and action – and it couldn’t have come at a better time.”

“Some of the historical and current subjects are familiar; some are little known.  For all them, Rovics gives a short and illuminating background sketch. The stories are told with imagination and clarity… There are many treats here, and a lot of surprises.”